How To Match Your Suits & Shoes Like A Proper Gentleman

Confused with what’s the best way to pair suits with dress shoes?

We’ve got you covered.

Having a proper suit in your wardrobe isn’t a luxury—it’s a necessity. Having the perfect pair of shoes to go with your suit? Well, that’s just common sense. Why let a great pair of dress shoes or a stunning suit go to waste by pairing the other poorly?

Finding a suit can be pretty intimidating, and finding the perfect dress shoes to pair might be too much pressure for just about any guy. Not to worry though, we’re here to help.

There are about 6 different styles of dress shoes, 6 different dress shoe toe tip styles (that’s for another day!), and then there’s this thing called brogues or broguing.

Styles of dress shoes include: 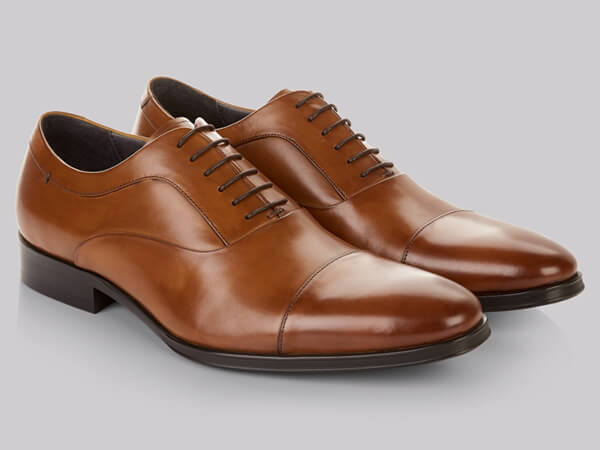 Oxfords are a formal lace-up shoe. You’ll notice with a typical Oxford, the part where the laces go through the holes, it’s pretty clean and usually doesn’t have the typical metal eyelets most lace-up shoes have. Oxfords typically have a slim shape that hugs the foot which gives it a sleek and timeless appearance.

Oxfords are also referred to as Balmorals, named after Balmoral Castle in Scotland.

Derbies are another formal lace-up shoe that’s often mistaken for an Oxford since both are pretty similar. The difference with both lies in the stitching on the vamp (the front and centre part of a shoe that covers the top of the foot). Derbies have a facing stitched on top of the vamp while with Oxfords, they’re sewn under.

Derbies were originally made in the 1850s as a sporting and hunting boot. Because of that background, a Derby is seen as a less formal version of an Oxford. Derbies are also sometimes called Bluchers or Gibsons. 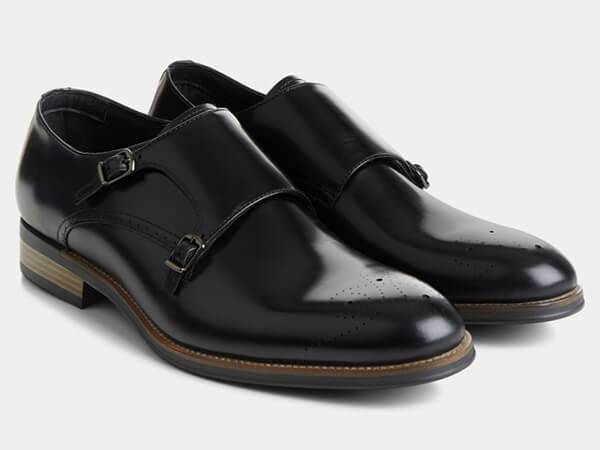 Monk Strap dress shoes are known for their distinct and bold buckles. Single Monk Straps are pretty original and timeless while Double Monk Straps have more of a military vibe. And yes, the style was actually named after monks. Monk Straps were named after earlier century monks who wanted an alternative to sandals. 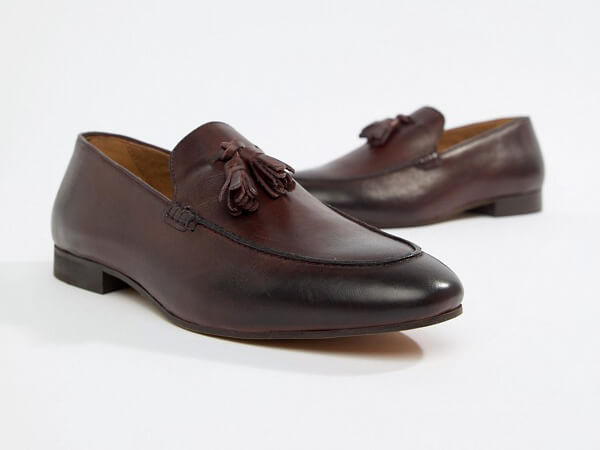 When you think of loafers, you immediately picture slip-on shoes. Loafers offer a truly laid-back look compared to other dress shoes. Loafers are pretty low, without laces, and have a similar look to a Moccasin.

If you’re a bit confused between the two, just remember that Loafers have a bit of a heel whereas Moccasins do not. Loafers often feature a decorative saddle, strap, or metal ornament in the front. 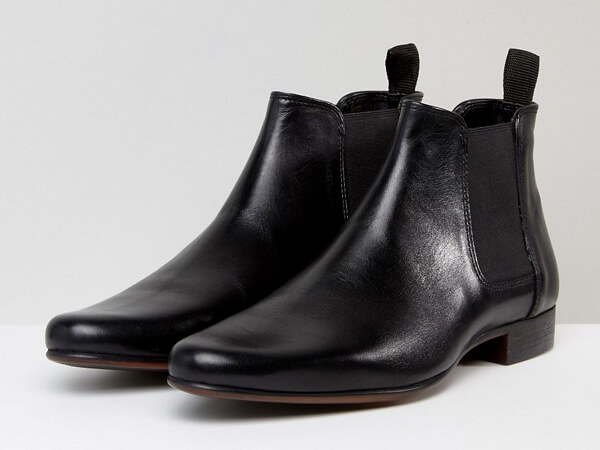 The Chelsea boot originated in Victorian England but was later popularised by British bands in the 1960s. A Chelsea dress shoe is characterised by its smooth and sleek design, plus the iconic elastic on the side with a boot cut typically above the ankle. 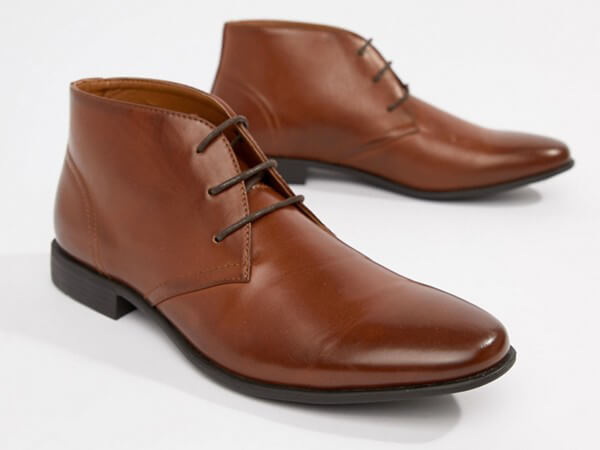 Chukkas were made popular by polo players and got its name from the unit of time by which polo matches are measured. Chukkas are ankle-length boots with laces. They’re traditionally made of soft suede and are usually worn as part of a smart-casual outfit, but can easily be “dressy” if it’s in black leather.

If you’ve seen the movie “Kingsman,” you’ve definitely heard this line before. If your knowledge of men’s formal wear isn’t up to par yet of a typical posh gentleman and this line got you thinking that Oxfords and Brogues are two totally different types of dress shoes: then you, my friend, have been severely bamboozled.

Here’s the truth behind this saying. Brogues simply refer to broguing which is a pattern of perforations on a dress shoe. Stylistically, Oxfords are known for their sleek minimalist design but to clear it up—an Oxford dress shoe can definitely have broguing or be considered a Brogue.

So again, Brogues aren’t an actual singular separate type of dress shoe. Brogues refer to the design and the main point is that any type of shoe can have broguing on it. Thanks for confusing us all, Colin Firth. 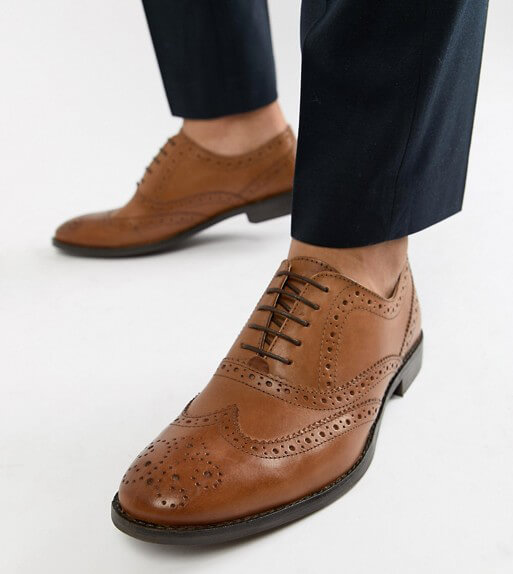 Oxfords with broguing from ASOS

Shoes can make or break even the most perfect suit.

So we went through the different types of dress shoe styles, now we’re going to talk a bit about colour and how to pair those colours with suits. According to your suit, here’s the perfect dress shoe colour to pair it with.

Go for dress shoe colours that are black, brown, oxblood or burgundy. Some people view navy blue as a very formal, almost regal colour. Psychologically, the colour blue relates to responsibility, trust, and calmness. Pairing navy blue with those darker browns won’t be distracting and ties your entire outfit together.

Navy blue suits are best worn to make you appear younger, and for when you’re meeting people for the first time and you’re trying to make a good impression. A great example of this would be a job interview.

If you’re wearing a light or medium grey suit…

Go for dress shoe colours that are black, brown, oxblood or burgundy. Grey suits are seen as less formal compared to navy blue suits. For formal occasions, definitely don’t go wearing a grey suit. For the office, a grey suit can be a good day-to-day go-to, especially for workplaces that have a more casual dress code.

For light grey suits, it’s best to wear them during the summer or during warmer months for a more laid-back vibe. Grey suits are perfect for experimenting with your colour and pattern choices in dress shirts, pocket squares, ties, bowties, and even brogues.

Plain black dress shoes are your best choice when wearing a charcoal grey suit. However, burgundy coloured dress shoes easily help tone down the formalness of the suit and makes you appear a little bit more relaxed yet still classy.

If you’re wearing a brown suit…

When wearing both a brown suit and brown dress shoes, make sure there’s a visible shade difference between the two. Wearing the same colour of browns for both shoes and suit just doesn’t work. If you’re a little confused or worried, just remember that it’s better for your shoes to be darker than your suit. This is so the focus is kept on your suit, and so your shoes won’t be too distracting.

If you’re wearing a black suit…

When wearing black suits, the only proper dress shoe colour choice is black. Black suits are the least flexible in terms of style. Wearing any other colour of dress shoe will make the whole outfit look too casual and sometimes a bit off.

It’s best to reserve your black suits for very strict business functions, black-tie parties, and formal events. To tie your whole outfit together, an Oxford is your best choice of dress shoe.

What happens if I break any of these styling rules?

So, are all these matching rules set in stone? Absolutely not. This serves as a safe beginner’s guide. If you want to break any of these rules, do it because you’re consciously making them and you’re doing your best to stay and look unique.

If the event or space you’re wearing your suit to is casual enough, a little experimentation might help you stand out in the best possible way. Just remember that whatever choice you make—commit! And in the infamous words of Tim Gunn, make it work!

Now that you know the differences between dress shoes and which colours work best together check out our list of recommended shoe retailers if you are looking for a new pair of shoes to go with your suit. 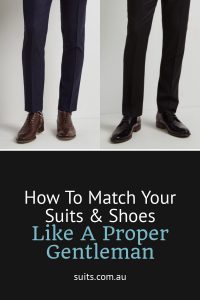